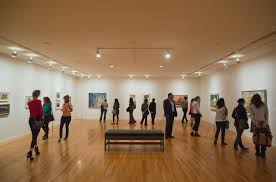 My son recently told me a story that I felt was really interesting. I wanted to share it because I think we can all learn some things from this story.

He explained to me that he has a friend who works at an art gallery. This particular gallery hosts art exhibits where people come get cocktails and walk around viewing the art.

Sometimes, artists are there to answer questions or do demonstrations. At times the gallery invites an artist to come, set up and paint while they are at the show so people can actually see them in action.

For one particular show, the artist agreed to come, and he requested a large black canvas that he could paint on. The rest he would supply.

My son’s friend, who was the gallery assistant, pulled the plain black canvas from the back room and set it up on an easel. She had a chair next to the canvas and posted the artist’s name with it.

About 4 p.m. on the day of the event, the artist called, saying he had an emergency and had to cancel. In all the craziness, the assistant forgot to take the canvas down, so it was left there throughout the show that evening.

At the end of the night, they have a service where, if you bought a piece of art, the organization will take the art into the back room, wrap it up, bring it out to your car and put it in for you, or deliver it, if necessary.

My son’s friend, who was outside working the deliveries, and a man were standing there for quite a long time. So, she said, “Can I help you sir?”

He said, “Yes, I’m waiting for my piece of art to come out.”

She replied: “Well, let me help you. Which is it?” He told her it was the black portrait.

He said it was the all-black modern piece. And the man explained that he paid $700 for that and really liked it.

She scratched her head, walked inside, and had someone wrap it up for him and bring it to the car.

I’m not sure how I feel about the ethics of this, but what I found so interesting about this story is that perception is reality, and what happened was because it was in an upscale art gallery and, nicely displayed, the man perceived the blank canvas to be a piece of modern art.

So, what do we learn through this? I think what we learn is that, in most cases, and most things that we do and sell, people really think what they want to think, no matter what you tell them.

What’s important here is to make sure that your brand — in other words, what your company stands for or what you as a salesperson or entrepreneur or professional stand for — should be the best quality it can be.

If you are going to see someone in person, you should be dressed as if that person is the most important person you could ever meet. You need to be researched and prepared, and everything you do has to be professionally done.

When it is, you’re perceived as a professional. You’re perceived to be of a higher quality than your competitors for no other reason than perception.

So, how are you being perceived?

Previous Post Raw Talent Next Post Lead Generating with Social Media is only Half the Battle.
Menu
×