What is REALLY in your Sales Funnel?

The sales funnel has become very interesting because it is very loosely defined. I have clients that tell me that have “about 20 people in their funnel” which to them means they have tried to reach them. I have others that put someone in their funnel when they have spoken to them once and have gotten the dreaded, “Ill Think It over” (which basically is a blow off), “Send Me something and Ill review it” Same thing, and others that have given a proposal and are doing the waiting game.

None are really correct.

The funnel truly had only a few true entrances;

1) Have you spoken to the prospect and have they AGREED to a next step of some kind? IF so, they go into the funnel.

2) You have set an appointment with them, in person, on the phone, Skype etc. That you have BOTH agreed on.

3) You are scheduled for a demo or a proposal etc and YOU KNOW the outcome if they like the recommendation.

The biggest danger in sales is, FOLLOW UP.. This is a bad word in sales because all of the work is on the sales person. there is no mutual understanding of next steps. Should this person be in your funnel, not a chance. Only when 2 people have agreed to move through it together. 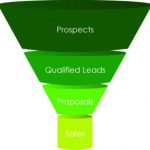